As I come from a small town in Germany, huge cities like New York stress me after some days. My favorite NYC places to relax are Central Park and the High Line. But when you’re walking in the Time Square area and you need a break, go to Bryant Park. There are benches, and in summer you can sit on the grass and enjoy a green spot in the center of rush.

In 1686, when the area was still a wilderness, New York’s colonial governor at that time designated the area as a public space. George Washington’s troops crossed the area while retreating from the Battle of Long Island in 1776. Beginning in 1823, the future park was designated a graveyard for the poor and remained so until 1840, when thousands of bodies were moved to Wards Island. 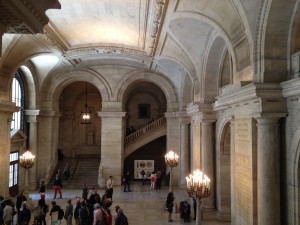 The first park at this site opened in 1847 as Reservoir Square. It was named after its neighbor, the Croton Distributing Reservoir. In 1853, the Exhibition of the Industry of All Nations took place in the park. The square was used for military drills during the American Civil War. In 1884, Reservoir Square was renamed Bryant Park, to honor the New York Evening Post editor and abolitionist William Cullen Bryant. In 1899, the Reservoir structure was removed and construction of the New York Public Library building began. Terrace gardens, public facilities, and kiosks were added to the park.

Bryant Park is located in Midtown Manhattan between Fifth and Sixth Avenue. The Main Branch of the New York Public Library forms the park’s functional eastern boundary. Bryant Park is located entirely over an underground structure that houses the library’s stacks, which were built in the 1980s when the park was closed to the public and excavated; the new library facilities were built below ground level while the park was restored above it. Since 1980, the park is managed by the private not-for-profit corporation Bryant Park Corporation. 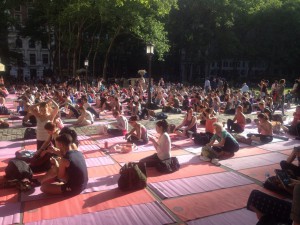 Numerous events are hosted on the Great Lawn at Bryant Park, for example the Bryant Park Summer Film Festival and free musical performances. The park has a chess concession at the west end that offers chess boards and lessons. There is also a court for practitioners of the French game Pétanque, and two ping pong tables. Also popular are free classes in juggling, yoga, tai chi and knitting. Since its restoration, Bryant Park has become a favored setting for movies, like Ghostbusters (1984) or Sex and the city (2008). In December, you can go to The Holiday Shops, modeled on Europe’s Christkindlmarkt, and buy crafts and commercial merchandise from vendors. In Winter, there is also a free-admission ice skating rink that instantly became a fixture in the Manhattan holiday scene.

For me, it was a great place to relax before walking around Times Square and visiting the beautiful New York Publish Library. I recommend to buy your lunch nearby and to eat in the park laying on the grass as many real New Yorkers do it during their lunch break. 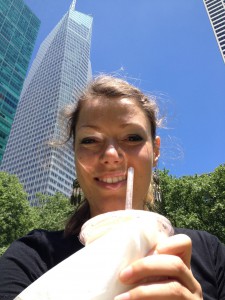