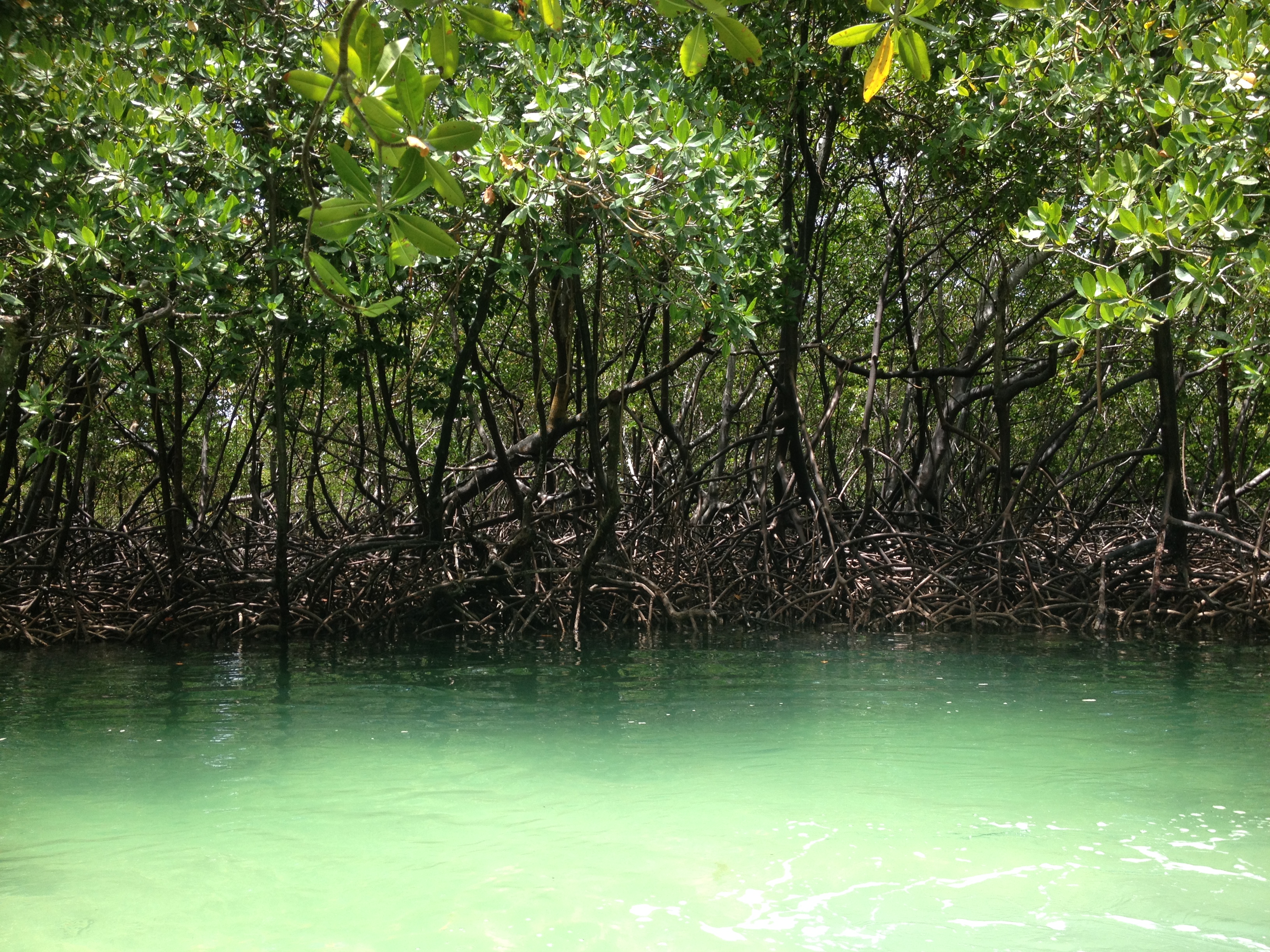 The ecosystem Mangrove is originated by salt tolerant types of trees up to medium height and by shrubs that grow in saline coastal sediment habitats in the tropics and subtropics with a water temperature of about 68°F (20°C). The mangrove forest areas of the world in 2005 was about 58,000 mi² (150,000 km²) spanning 118 countries and territories. Approximately 75% of world’s mangroves are found in just 15 countries. Asia has the largest amount (42%) of the world’s mangroves, followed by Africa (21%), North/Central America (15%), Oceania (12%) and South America (11%). All the pictures you can see in this post were taken on the North coast of the Dominican Republic.

Mangroves are adapted to live in harsh coastal conditions. They contain a complex salt filtration system and complex root system to cope with salt water immersion and wave action. They are adapted to the low oxygen conditions of waterlogged mud.

The term « mangrove » came from Portuguese through Spanish to English and is likely to originate from the Amerindian language Guaraní. It was earlier « mangrow » (from Portuguese mangue), but this word was corrupted via folk etymology influence of the word « grove ». Why do I write about mangroves in a blog that is about culture? Because humans depend on mangrove forests and the culture of the people in regions where these forests are native is influenced by this ecosystem. Magrove forests are endangered by shrimp farming (especially in Asia, but also in Latin America), by oil pollution (Panama, Persian Gulf, Niger delta) and by draining of mangrove areas for housing development on the coasts. Protecting the mangrove ecosystem is not only necessary regarding the climate change. There are much more reasons to preserve it. Mangrove swamps protect coastal areas from erosion, storm surge (especially during hurricanes) and tsunamis. Also, the unique ecosystem found in the intricate mesh of mangrove roots offers a quiet marine region for young organisms. In areas where roots are permanently submerged, the organisms they host include algae, barnacles, oysters, sponges and bryozoans, which all require a hard surface for anchoring while they filter feed. Shrimps and mud lobsters use the muddy bottoms as their home. Mangrove crabs munch on the mangrove leaves, adding nutritients to the mangal muds for other bottom feeders. And what about the people who live on mangrove forest coasts? They use the wood as firewood and for charcoal or tanning agents making. It is also proved that coast fishing decreased dramatically where mangroves were deforested extensively. All that shows that deforesting destroys the traditional way of life of many local people.

Efforts to restore the mangroves are made for example in Vietnam, Thailand, India, Sri Lanka and the Philippines. Despite these efforts the destruction of mangroves continues in many regions.